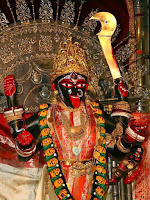 Ramakrishna has thus described his first vision of the Mother:

"I felt as if my heart were being squeezed like a wet towel. I was overpowered with a great restlessness and a fear that it might not be my lot to realize Her in this life. I could not bear the separation from Her any longer. Life seemed to be not worth living.
Suddenly my glance fell on the sword that was kept in the Mother's temple. I determined to put an end to my life. When I jumped up like a madman and seized it, suddenly the blessed Mother revealed Herself. The buildings with their different parts, the temple, and everything else vanished from my sight, leaving no trace whatsoever, and in their stead I saw a limitless, infinite, effulgent Ocean of Consciousness. As far as the eye could see, the shining billows were madly rushing at me from all sides with a terrific noise, to swallow me up! I was panting for breath. I was caught in the rush and collapsed, unconscious. What was happening in the outside world I did not know; but within me there was a steady flow of undiluted bliss, altogether new, and I felt the presence of the Divine Mother."
On his lips when he regained consciousness of the world was the word "Mother".
-THE FIRST VISION OF KALI from the introduction to The Gospel of Sri Ramakrishna
Posted by Unknown at 9:07 PM 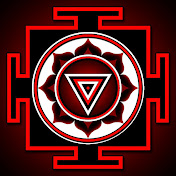 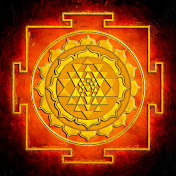